I recently played a game called BEEP which had a grappling hook mechanic. The game used Box2D, so I wanted to figure out how they did it. After figuring out a combination of revolute and prismatic joints is the best solution, I also wanted to make a ninja rope like in Worms games, where you can move up/down the rope, stand on the rope like it is a pole and the rope wraps around the terrain. I didn't manage to make it perfect, but it kind of works.

The easiest method is to just create a new rope joint connecting the player and terrain body and Box2D will handle the rest. There are two problems with this method:

a) Since it is a rope nothing is stopping the player to move closer to the point where rope connects to the terrain. The rope just stops the player from moving further away than what is defined with joint's maximum length (SetMaxLength()) variable. This makes it impossible to stand on the rope.
b) The player can't move up or down along the rope. The joint's maximum length can be changed after it is created, but that will either; try to move the player "by force" upwards if it is changed to lower value even if something is blocking the way(might even just teleport it instantly), or the player will just fall down a bit if the rope is changed to be longer.

Alternatively a distance joint can be used instead of a rope joint. The difference is that the player body will not be able to move closer to where rope connects to the terrain or fall down, since the joint always tries to maintain the same distance. This is actually closer to the ninja rope behavior in Worms than the rope joint option and you can stand on the rope using this method. SetLength() can be used to "move" the player along the rope, but similar to the rope joint it tries to push the player to new position even if there is something in the way.

This is also a simple method, but requires a lot more work. Simply create many small bodies between the player and the terrain body and connect everything with revolute joints. The problems:

a) The rope is a bit hard to control, moves around too much and can stretch. In games like Worms or Bionic Commando the rope isn't behaving very realistically, more important was giving the player intuitive control over it.
b) You can't move up/down the rope or stand on it.

The positive thing about this method is that the rope can wrap around terrain without any additional coding. 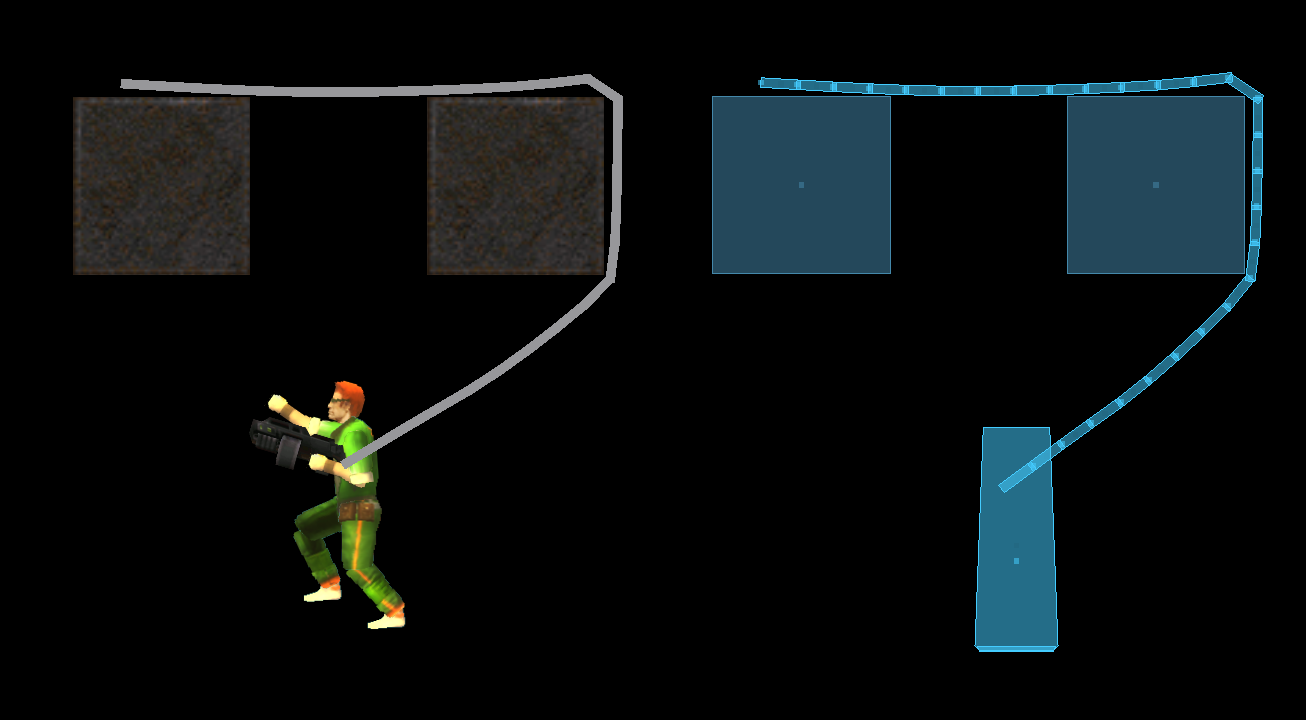 Tips:
1) For some reason joints are more stable if the bodies connected have higher density value, but the downside is that heavier rope is harder to control.
2) Enable joint motors and set torque to very small value and set the speed to zero, so the chain stops swinging sooner.
3) Connect the terrain and the player with a rope joint to prevent the chain from stretching too much. The max length should be same as the length of the entire chain or just a tiny a bit longer, depending how much do you want to allow it to stretch.
4) Since all the chain bodies would by default have zero linear and angular velocity when created, it would slow down the moving player when initially created. I don't know how to calculate the initial values of each link based on player velocity and stuff, but simply giving all the bodies the same velocity as the player at the moment of creation works good enough.

The best way to make Worms like ninja rope using Box2D is using a prismatic joint on a rotating body:
a) With a prismatic joint the body is limited to moving/sliding along an axis and that is exactly what we need.
b) Using the joint's motor we can make the attached body move up/down without breaking the physics simulation and if some object is in the way and blocking the movement it will behave normally (unless we set the motor torque to an insanely huge value).
c) Using a motor with a high torque we can fix the players position on the rope, so the player can "stand" on the rope, just like in Worms games.

The rope will have three parts:

1. Rope/hook (long thin triangle) - a body which is connected to terrain using a revolute joint, so the whole thing can swing.
2. Slider (rectangle) - a body connected to the hook using a prismatic joint, so the player can move up/down the rope using the joint's motor.
3. Rotor (yellow circle) - Usually in Box2D games the player body has a fixed rotation, so it always stays upwards. We can't connect it directly to the slider, because with fixed rotation it wont allow connected bodies to rotate freely. There needs to be a body between the player and slider connected to both with a revolute joint, so the player can maintain the fixed rotation, but the rope can still freely rotate. If you have a player that can rotate freely, this isn't needed and can be attached directly.

It is important to note that only one segment of ninja rope is fully active at any given moment. Basically the swinging part will work as described above in the method 4, and the rest of the rope are just static points with a line rendered between them. 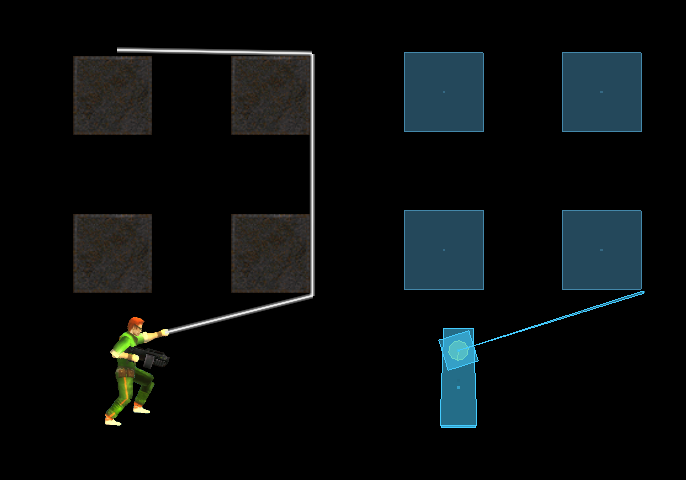 a) How to detect when a corner is hit and split the rope ?

One method is to use the rope/hook part from method 4. It needs to be very long and thin, and needs to be a bullet body. When bullet bodies collide in Box2D you get the exact point of impact in PreSolve() callback function which you can use to determine where the rope needs to be split.

- The rope needs to collide with the terrain, but shouldn't bounce of the terrain, we just need the collision point. So in the PreSolve() callback the contact needs to be disabled with contact->SetEnabled(false).
- The rope should not be connected directly on the collision point, because we don't want the tip of the rope/hook to constantly collide around that point while rotating and cause problems. The connection point needs to be a bit outside of the terrain body (see image above).

When existing rope collides all the rope objects are deleted and the rope is recreated in that collision point. Like mentioned previously; only the last part of the rope is active. The previous connection points are still needed to render the entire rope and to know when to reconnect the parts.

The downside of using this method is that when the player is moved all the way up the rope, you have all this extra mass bellow him (the player in not the center of mass) that can cause unwanted movement.
The solution is to make the rope/hook body very small, so the center of mass is always the player, and use some other method to find out where the rope hits the terrain.

b) How to reconnect it all again ?

Simple; if you swing clockwise and hit something and split the rope, you will have to reconnect only when you swing in the opposite direction and past that point. Use the revolute joint's speed to check the direction(negative is clockwise, positive is counter-clockwise), and you can check if you past that point using a cross product formula:

Two last rope points is the line you need to cross, and the point you check is the current player position. If you crossed the line you remove the last rope point and recreate the rope in the last of the remaining collision points. While doing all this splitting and reconnecting you need to keep in mind the total length of the rope, and change the rope/hook body length accordingly.

You can try it out for yourself using the link above. I also uploaded the source code for the rope handling. Not sure how useful it will be, since I just copied it from my game/engine, so don't expect to just copy/paste it into your code and think it will work. Think of it more as a sign of goodwill. Don't forget to read the included README.